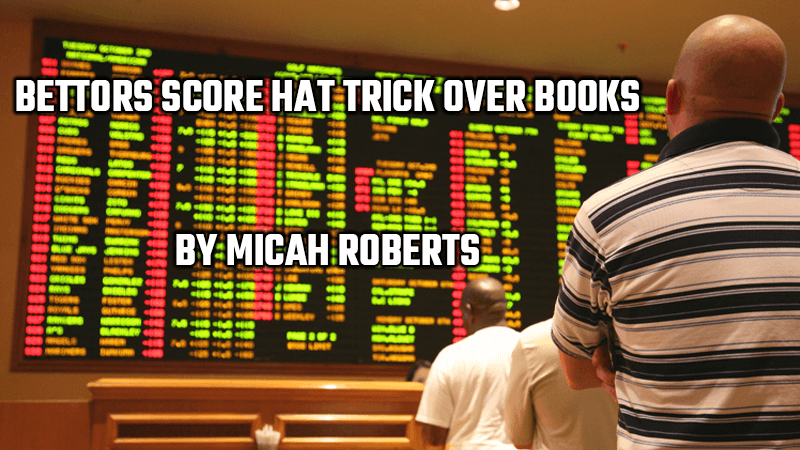 Joe Public has been staying the course with their regular NFL betting patterns and they’re killing the sportsbooks.

I’ve worked in the Las Vegas sportsbooks for 20 years and been covering them for the last 11 years and I don’t ever remember the books losing big for three straight weeks.

“Another 7-figure losing day for the third week in a row. The Buccaneers, Raiders, and Packers were really bad,” said BetMGM sportsbook director Jeff Stoneback. “Only the Giants were a winner for us.”

The Las Vegas Strip sportsbooks like MGM and Caesars felt the most Sunday heat from losses while the local chains didn’t lose as much as last week and a few books came up slightly ahead with South Point sportsbook director Chris Andrews calling the day “fair.”

“We were a small loser, no way to win tonight,” said McCormick prior to kickoff of the Colts-49ers game. “The Patriots, Packers, Raiders and Over, and Buccaneers combo sunk the ship.”

The Patriots (-7) were bet heavily in parlays this week even though they were 0-4 at home, 1-3 ATS. But it was the 1-4 Jets. They weren’t betting on the Patriots as much as they were betting against the Jets and they were correct with not even a sweat in the Patriots 54-13 romp.

The public also hates the Washington Football Team and loves the Packers (-8.5) who were going for their sixth straight win and cover. The Packers’ defense got three important calls go their way to derail two would-be touchdowns for the Washington offense. All three calls got reviewed by video replay and all three went against Washington. Packers win 24-10.

Sharp money came in late Sunday on the Eagles just as it was announced TE Darren Waller would miss the game for the Raiders. They moved the Raiders from -3 to -2.5 on Friday and then bet the Eagles on Sunday all the way to pick’em.

But Joe Public didn’t care what the spread was. They had the Raiders interwoven in all their parlays and were rewarded with an impressive 33-22 win behind QB Derek Carr’s 31 of 34 passing for 323 yards and two TDs. The total closed at 48 after opening 49.

And then Tom Brady at home where the Buccaneers are 3-0 and averaged a 41-23 score. These bettors are informed and they know Brady on the road in isolated night games is a tough lay, but Brady at home is money. All he would do is pass for four TDs and crossover 600 career TD passes, more than double the 300 TD passes thrown by Hall-of-Famer John Elway.

“We were small winners,” SuperBook VP Jay Kornegay said. “We lost a couple of bigger decisions, gave some back late with the Cardinals and Buccaneers.”

The Cardinals already started the week with a 3-point boost of dirty tax on the lousy Texans which should have opened -14 but opened -17 instead and the game moved fast by Sunday up to -20.5, and bettors still laid it. They hate the Texans with rookie QB Davis Mills almost as much as they hate the Jets. It was a sweat for some, but the Cards got a late TD to win 31-5 which is the first time in NFL history any game landed 31-5.

“We’re winning in Nevada and losing in Colorado,” said Atlantis sportsbook director Marc Nelson. “The Chiefs and the Rams not covering was the only thing that saved us.”

Jared Goff made his return to SoFi Stadium to play his former team and against the QB (Matt Stafford) he was traded for in the offseason. This was one week after Lions coach Dan Campbell told the media Goff needs to step up after an 0-6 start.

Joe Public hates the Lions too, but they respect them because the Lions were 3-3 ATS and showed they could move the ball. They did right out of the gate with a TD and then surprised the Rams with an onside kick on the ensuing kickoff. It was 10-0 and those laying a heavily taxed Rams number up to -16.5 knew this might be their loser. The Lions hung tough, losing 28-19, but the Rams proved themselves correct in the trade when Goff threw a red-zone pick to Jalen Ramsey that could have given the Lions the late lead.

The Chiefs (-4) were favored at Tennessee and the Titans came strong fast and it wasn’t even RB Derrick Henry doing the damage. It was a team effort on offense in winning 27-3, which obviously stayed under a season-high total of 59 that was bet up from 56.

The Chiefs have slowly been losing the favor of the public and this loss may have put KC in the betting doghouse for a while until they snap out of it. But can they just snap out of it?

I refuse to believe that NFL defenses have found the magical elixir to frustrate Chiefs QB Patrick Mahomes. Defenses can now magically put two safeties up top against the Chiefs and never blitz. Did it take them four years to figure out? No, something else is the matter. At times, Mahomes looks lost and he’s already had an NFL-leading nine interceptions after having just six all of last season. The Titans win was one of four underdogs to win outright on Sunday with favorites going 5-5-1 ATS.

“It’s unbelievable that we’’ll win to everything in the late game other than the Colts outright,” Nelson said. “Won't get us out though.”

Congrats bettors, stay steady and strong in your dismantling of the sportsbooks the last three weeks. I wouldn’t suggest changing anything about your betting philosophy until it loses. Ride the streak, but do know that it does always cycle around and usually does when we see the popular teams have an egregious dirty tax attached when they’re playing bad teams.