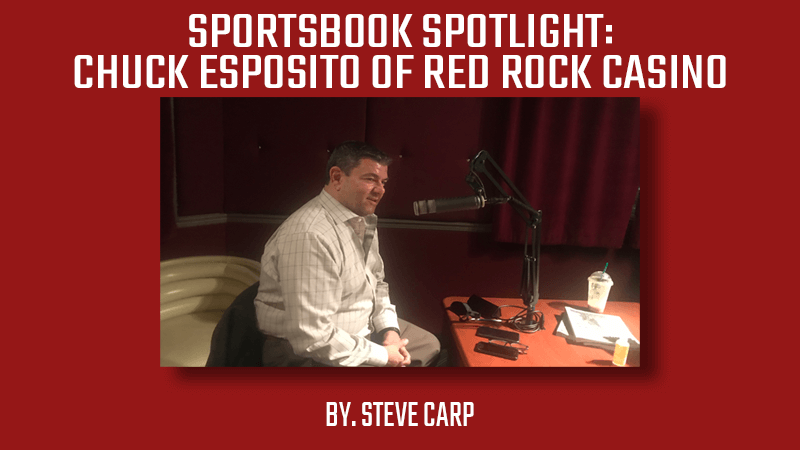 Note: This is the first in a series of feature stories on sportsbook directors that will appear exclusively at kennywhitesports.com.

Chuck Esposito could have conducted the interview for this story in his office. Which would have been perfectly fine. But Esposito likes being out on the floor among his customers and if someone stops him in the middle of a sentence to say hi or ask a question, he’s fine with that too.

“I’ve always enjoyed being out on the floor among the customers,” the veteran sportsbook director said. “You can’t stay cooped up in your office all day.”

Esposito has been with Station Casinos for 11 years, first at Sunset Station, where he oversaw the daily operation of the Henderson property’s Race and Sportsbook, and now, at Red Rock Resort, on of the company’s two high-end properties (Green Valley Ranch is the other).

“It’s been phenomenal,” Esposito said of the move which took place in August. “Red Rock is such a beautiful property and it’s also the hub for all our Station properties.”

Esposito had no intention of leaving Sunset Station. He was very happy there. But when Art Manteris decided to retire, Jason McCormick was elevated to Manteris’ VP of race and Sports for the company. Esposito, in turn, moved into McCormick’s spot at Red Rock.

“Jason and I are very good friends and to have the chance to work with him and be part of his team, I feel extremely lucky,” Esposito said.

Esposito has also been a big part of the STN Sports mobile app and the extensive marketing campaign and rebranding in all the Station Casinos books. With other casinos aggressively marketing their apps, Station had no choice but to go all in and promote STN Sports.

“I think the industry is changing all the time,” he said. “Everything changes almost daily. So you’re trying to grow and learn.

“The STN app is reliable. We upgraded the software to make it more user friendly, for both sports and race. A lot of horseplayers are taking advantage of the app and it makes it easier for them to bet. They don’t have to worry about getting shut out.

“The other thing we’ve done is placed betting kiosks in all our books. That has cut down the wait time on line significantly. You can bet on everything at the kiosk that you can at the window.”

The app and the kiosk have become important customer service tools. While Nevada and the rest of the country remains in the throes of a pandemic, bettors have flocked back to the books. Sunday, it was standing room only throughout the day for Week 6 of the NFL and many bettors were on their phones rather than wait on line. It also helps drive Station’s in-game wagering, something that has gained in increasing popularity the last few years.

“It’s feeling like normal,” he said. “People want to get out again.

“Of course, we still have to wear masks and keep things clean around the property. When this started a couple years ago and we had to shut down for a few months, that was really tough on everyone. But our people bought into all the measures when we reopened and that was the key.

“What it did was it changed our thinking forever. We emphasized ‘team’ and we made it work. I’ll always be proud of our staff.”

Esposito brought a couple of his Sunset assistants, Whitney and Leah, with him to Red Rock to help with the transition.

“We were looking to bring talented individuals who understand the industry and customer service,” he said of bringing his assistants with him.

Together, they are trying to make the sportsbook experience more enjoyable. They are also trying to connect with their predominantly local clientele by having Las Vegas-centric wagers on the menu.

“Obviously, we’ve got plenty of props with the (Golden) Knights and withe the raiders,” he said. “But we are one of the few properties in town who booked the (Triple-A Baseball) Aviators, which makes sense since the (Las Vegas) Ballpark is right across the street from us. We also did some stuff with the (WNBA) Aces.”

The hope is as COVID-19 becomes less of a threat, there’ll be more out-of-town visitors coming out to Red Rock for meetings and small conventions which would mean more traffic in the race and sportsbook.

“It’s a great property,” he said. “Great restaurants. Movie Theaters. Bowling. All the casino games, and, of course, a great race and sportsbook.”