TOP STORIES
What's next for LSU and Notre Dame after Brian Kelly's stunning move?
Sources: LSU hiring Kelly away from Notre Dame
Sources: Seager, Rangers agree on $325M deal
Riley says leaving OU was tough but 'right thing'
Cowboys' Hill suspended two games for punch
Sources: Bobo out as Auburn's OC after one year
Sources: Mets, Scherzer agree to $130M deal
Tiger OK with 'reality' he won't be same player
Harbaugh to give bonus to COVID-affected staff
The far-reaching implications of Lincoln Riley's USC move
Current playoff picture: AFC shake-up as Ravens slide into No. 1 seed
Who will make the College Football Playoff?
Rangnick's task at Man United, Juventus trouble on and off the pitch, Real Madrid take control in LaLiga
Ronaldo's role with Man United in question with Ralf Rangnick's arrival
Ballon d'Or prize tainted by lack of respect given to women's game
Trade value: Jaylen Waddle among top players to get before deadline
NBA Power Rankings: Can anyone catch the Suns and Warriors?
NCAA volleyball tournament: Breaking down the bracket, predictions and more
Inside Gonzaga's Vegas week: Two wins, an instant-classic loss and a team under construction
Men's basketball: Why Duke edges Purdue for No. 1 spot
Women's basketball: Which teams are thriving and surviving November's tough schedules?
Alabama gets exposed, the key to beating Georgia and more college football takeaways
SCNext Top 25 - The best girls' high school basketball teams
Bold predictions for the end of 2021 in MMA, including a defining moment for Rob Font
Notable Bets: November among worst months ever for betting public
Ecclestone: F1 owes its success to men like Williams
Transfer Talk: Man City want Real's Benzema to solve striker issue
Mobley, Cunningham, Barnes and an NBA rookie class to be thankful for

The Sixers Can Survive Without Simmons 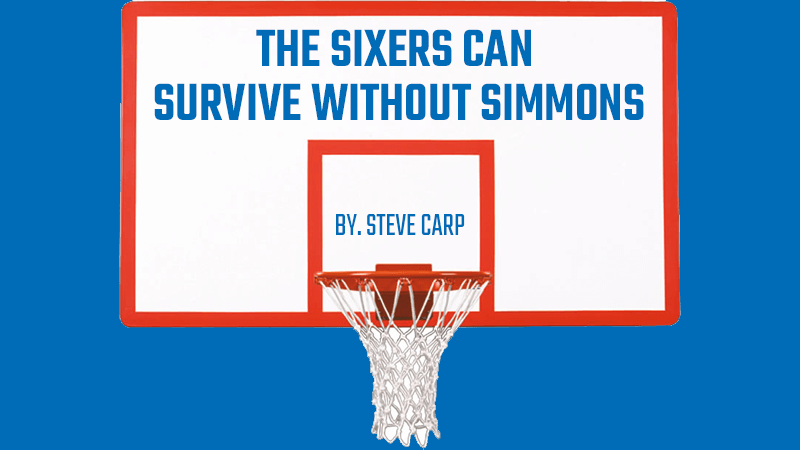 This Ben Simmons stuff going on in Philly is starting to grate on my nerves. And I’m not even a 76ers fan. For me personally, the more chaos surrounding the Sixers, the better.

It’s abundantly clear that the talented but enigmatic all-star guard from Australia does not want to be in Philadelphia. Yes, the obvious answer is to trade him away, but you do so at the risk of getting fleeced and really alienating what is already a vocal and angry fan base.

He got thrown out of practice the other day for refusing to participate in a defensive drill and was fined and suspended. Simmons has racked up over $2 million in fines by the team and he is clearly a cancer in the locker room. None other than Joel Embiid, who has been extremely patient in dealing with Simmons, said it’s not his job to babysit his teammate. And he’s absolutely right.

Now, Simmons is claiming he’s mentally unfit to play in the NBA as a way to collect his paycheck without having to work for it. Normally, I’d be sympathetic with an athlete who is dealing with mental health issues. I am a supporter of Robin Lehner, the Vegas Golden Knights goaltender who is at the forefront of advocating for athletes and their mental health.

I backed Naomi Osaka’s decisions to not play tennis and I also was in Simone Biles’ corner when the great gymnast decided she needed a time out from competing. Those are well-documented cases and are totally legitimate.

I need to be careful here since I am not a doctor and I don’t know the extent of Simmons’ mental health issues. But at face value, it looks like an excuse. It’s like an episode of Law & Order where the defendant shoots someone, realizes he’s going to get the death penalty, then tells Jack McCoy through his lawyer that he’s guilty by reason of mental defect and winds up doing his time in a hospital instead of on death row.

If the 25-year-old Simmons is truly struggling with mental health issues, let him not play, let the NBA Players Association do what it has to regarding his salary and let him move on from playing for the 76ers and allow the team to get out from under that $147 million contract owed Simmons over the next four years. The NBA is not cut out for everyone and maybe Simmons simply isn’t able to cope with the day-in, day-out lifestyle that comes with playing NBA basketball.

As for the Sixers, you should not be afraid to support them at the betting windows/kiosks/apps. Doc Rivers is a really, really good coach when it comes to managing distractions and he is going to make sure his team’s focus is where it needs to be — which is taking care of business on the court.

He has enough veterans to ensure that the team doesn’t stray from the task at hand. Embiid, Tobias Harris, Andre Drummond and Danny Green will police the locker room and make sure things don’t become fractured.

There will be obvious situations when it doesn’t pay to bet on Philly, but those are the usual angles like the schedule stacking up on them, load management when stars get the night off, certain matchups that simply don’t go in their favor. But you should not be afraid to bet on the 76ers just because one malcontent is hogging the headlines. This is still a good basketball team that knows how to play and has learned how to win. To categorically dismiss these guys after two games would be a major mistake.