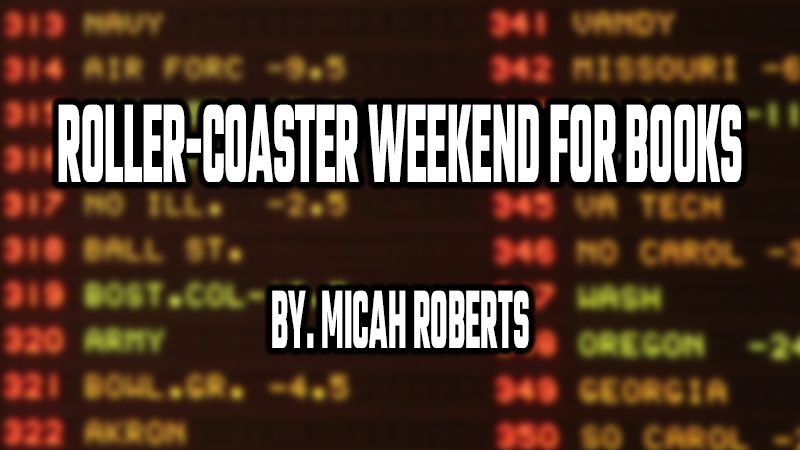 The NFL’s first Week 18 of a regular-season schedule turned out to be a wild one for bettors as favorites went only 5-9 ATS with seven underdogs winning outright. It was improbable simply because every Nevada sportsbook had every range of winning, breaking even, or losing big.

“It was a big morning and then we gave it back in the afternoon.” said BetMGM’s Jeff Stoneback. “The Jaguars were big for us while the Texans, Lions, and Dolphins were O.K. The Bucs were bad and the Saints cover wasn’t good either.”

The bookmakers sweated out the results of the first 13 games with no traction and then have the week all come down to one Sunday night game that has all the live parlays and teasers ready to cash on both sides. Last game of the week. No Monday night game. Los Angeles Chargers -3 at the Las Vegas Raiders. Playoff spot on the line. The biggest game in Las Vegas Raider history. Everyone wants a piece of the fun.

“We get crushed tonight if the Raiders win straight up,” Stoneback said before kickoff. “Seven figures. But we're a small winner at this point.”

The seven figures is a reference to what BetMGM would lose if the Raiders won, and the Raiders won a thriller in overtime, 35-32. The win covered +3, paid +130 on the money-line, and went over the total of 50. Both sides cashed on the teaser which further exacerbated the losses.

The severity of the win and losses at the books on Sunday was also due to the sportsbooks posting the season futures such as season wins, to win division, to make playoffs, and player props. Every year it seems like the same story with player props and season wins: the books lose.

“We had a long list of season-long props posted today,” said Westgate Las Vegas SuperBook VP Jay Kornegay. “They were on the short side of more than not but the (Sunday) games were very favorable. Break-even after the smoke cleared.”

The SuperBook closed out a city-high +700 on the Jaguars to win outright. The Colts were booted from the playoffs. All they had to do was win. The Colts play the Jaguars twice a year and they haven’t won at Jacksonville since 2014.

“Yes, we’re a loser but not too bad,” Kornegay said. “I would compare it to an oil change.”

An oil change reference is a new term for me that describes the win/loss on a day in the sportsbook, which is just a notch on the meter above the term ham sandwich or biscuit.

Station Casinos VP Jason McCormick said they needed the Chargers to have a winning day. Station Casinos, the locals favorites, were loaded on Raiders parlays.

The Raiders will kick off wild card weekend at Cincinnati on Sunday with the Bengals a 5.5-point favorite and the total at 49.5. The money-line at +220 (South Point) will be very popular with the locals.

Monday’s College Football Championship game won by Georgia, 33-18, over Alabama (+3) barely stayed under the total of 52. There were differing results at the sportsbooks as well with college football futures being posted. Georgia started out at 6-to-1 odds to win it all before the season.

Circa Sports director Matt Metcalf said their best decision was Georgia to win by 3 or less. Big money on Georgia to cover.

Kornegay said 74% of the cash on the game was on Georgia while 65% of the tickets bet were on Alabama. Big money wins, the public loses. He said before the game that Georgia and under was their worst-case scenario.

When I checked in with Stoneback on Tuesday morning I asked him if Georgia and under was a good result. He said, ”It was a great result.”

Then I jokingly asked, “Great, as in it wiped out Raiders-losses great?”

I was blown away. I know they regularly take in six-figure bets like it’s no big deal, but then I realized their massive futures pool in all sports from having 10 BetMGM books on the Las Vegas strip churning out thousands of new guests each day, and some of those still don’t have sportsbooks in their home town still so the future bet is still a fun gift to bring home to their friends.