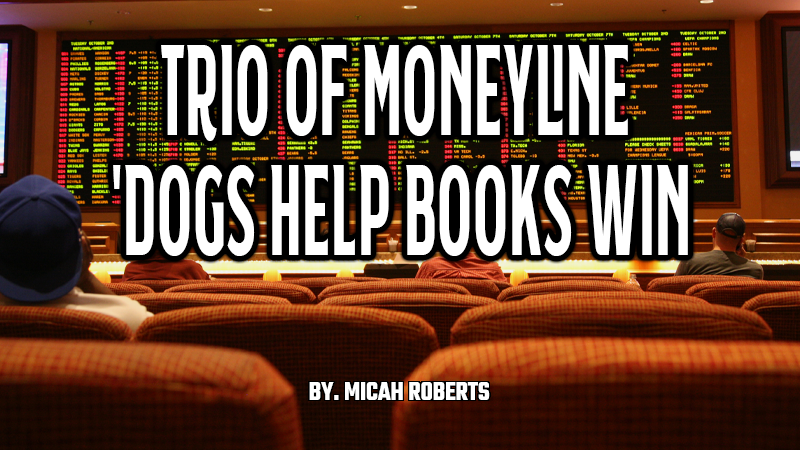 Sunday’s NFL Week 17 action had a little something for everyone as 15 games were offered that produced an 8-7 ATS record for favorites and nine unders, the perfect type of randomness that usually helps the sportsbooks, but it was a mixed bag for the books in Nevada.

Some books did really well, to average, or small, which is sometimes referred to as a ham sandwich. But no one reported a loss. Three of the popular favorites lost outright which flushed a bunch of public parlays and teasers.

“Excellent day and we needed it after a terrible New Year's Day,” said Station Casinos VP Jason McCormick. “The Ravens covering was one of the biggest wins of the day. The Jets, Washington, Raiders, and Cards were really good too. We need the Vikings tonight.”

The Vikings didn’t have their best night in a 37-10 loss at Green Bay. Sharp money had played the Vikings at +7 and +6.5 early in the week with the idea that QB Kirk Cousins would play, but he had a case of COVID and missed leaving the QB duties to seven-year veteran Sean Mannion and then spread closed Packers -13.5 with a total at 42.5.

“Small win,” said BetMGM’s Jeff Stoneback. “It was break-even in the nine morning games and the only decision that mattered in the late games was a win with the Cardinals. That was our best game followed by Washington, Cincinnati, and Rams. Our worst games were the Bears, Patriots, and 49ers and we don’t have a decision on the late game.”

The Cardinals had lost three straight and lost many of the accolades they were getting when starting the season 7-0. But they looked like an all-business team in their 25-22 win at Dallas. The Cardinals played with a sense of purpose and pride despite RB James Connor or WR DeAndre Hopkins being two of the multiple starters out.  The public loved the Cowboys who had won and covered their last four games and the line moved from Cowboys -5.5 to -6.5.

The Raiders were in a similar spot and were getting +9.5 on them before kickoff at Indianapolis. The Colts opened -7. But the Raiders made big plays through the air and won 23-20 which paid out +330 at William Hill sportsbooks.

The Ravens got the big cover in a 20-19 loss to the visiting Rams who went from -3.5 to -6 because Tyler Huntley was starting at QB instead of Lamar Jackson.

“It was a good day for us,” said Atlantis Reno director Marc Nelson. “The Bengals killed a bunch of parlays early. We didn’t really have any really good or really bad games, just a steady day. The Sunday night game is a lose-lose for us but it’ll be a good day though.”

The Bengals had been bet by a few sharp groups around Las Vegas pushing the Chiefs from -4.5 to -3.5 with a total closing at 51. But the public loved the Chiefs in their parlays and actually bet because the Chiefs had won eight straight and covered six straight coming into this game. Both teams lit up the scoreboard and stat sheet, but it was Bengals QB Joe Burrow who made the last big play to win 34-31 which paid out +184 at Circa Sports.

Burrow was making big plays most of the game completing 30-of-39 passes for 446 yards, 4 TDs, and no picks. Many of the big plays were to his former LSU teammate, rookie Ja’Marr Chase, who caught 11 passes for 266 yards and 3 TDs. The Chiefs defense kept lining up one-on-one with Chase and Burrow kept letting Chase beat his defender as long as the Chiefs didn’t change and it won the game for the Bengals. Chiefs DB Jarius Sneed was being picked on all day and didn’t have much success stopping any one of Burrow’s amazing wide-outs. I hope these two teams meet in the playoffs.

“It was a pretty solid day, despite a house player having a decent day,” said Westgate Las Vegas SuperBook VP Jay Kornegay. “The Chargers and Seahawks were our biggest losers on the day. The Jets outright would have been huge.”

The Jets (+14.5) battled hard at home against the world champions and held a 24-10 in the third quarter when Bucs WR Antonio Brown took off his pads, his undershirt, and left the field waving goodbye to the fans in the stands. It was a new chapter of bizarre in the recent times of Brown, but it also triggered the Buccaneers to a 28-24 comeback win.

The Jets were set to payout a Nevada-high +660 on the moneyline at Circa Sports. Brown was terminated, either before the actions, or at least definitely after the unusual outburst. Brown is the same player who used a fake vaccine card and was suspended three games this season. In a short time frame, he left Pittsburgh unhappy, left the Raiders and Patriots both unhappy, and now this new exit. He has speed and talent, but his mental health will keep him away from any future NFL locker room.

The entire Brown tirade took away from the fact that Jets head coach Robert Saleh made a horrible fourth-and-2 go-for-it call late in the fourth quarter, a move if successful that would have sealed a 24-20 Jets victory. Kick the field goal, go up by 7, and see if Tom Brady can tie it up and the Bucs almost certainly wouldn’t have gone for 2-points in that situation. If he does tie it up, then you still have life. Saleh went for the juggler trying to change the image of a franchise and he had no weapon and it turned into another Jets loss, but they did cover the spread.

The Chargers dominated the Broncos, 34-13, covering -7.5 and getting over the total of 45. Several Broncos didn’t play, including WR’s Jerry Jeudy, and Tim Patrick. The Chargers will play in sort of a wild wild card game this weekend at Las Vegas in the first Week 18 slate of games ever. The Chargers are -3, total 48.5.

The Seahawks covered against the third-best cover team in the NFL beating the Lions, 51-29, in what could be QB Russell Wilson’s final home game at Seattle, and let’s throw head coach Pete Carroll into the same category. This could be it. It sure has been fun.