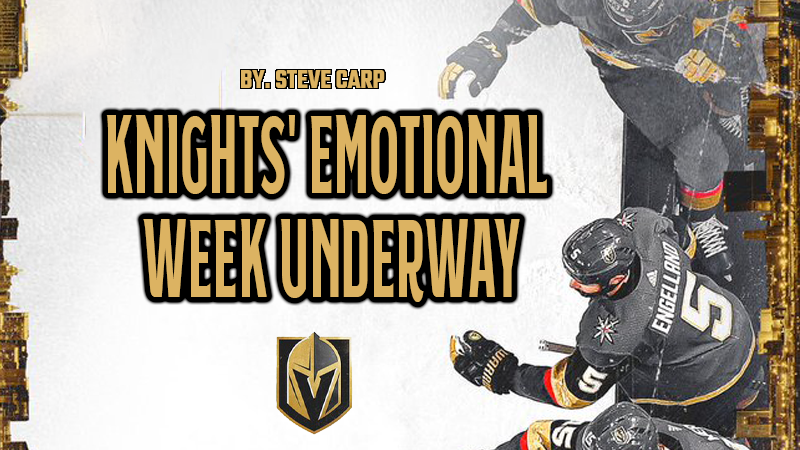 Emotion plays an integral role in all sports and hockey is no different. It really comes into play when old friends come a callin’.

The Vegas Golden Knights likely won’t experience a week like they’re going to over the next six days. It actually began Sunday when former Knights Nate Schmidt and Paul Stastny visited T-Mobile Arena as members of the Winnipeg Jets. It was the first time they were facing their former team since moving on two years ago.

The Knights are going to be going into the video vault a lot in the coming days. They did a tribute to both Schmidt and Stastny together in the first period of what would be a wild affair that saw the Jets prevail in overtime, 5-4, on Kyle Connor’s goal against Laurent Brossoit who was facing his old team for the first time since leaving last summer.

The tributes will continue Thursday when the New York Rangers visit The Fortress. Fan favorite Ryan Reaves returns to Vegas as does popular coach Gerard Gallant, who guided the Knights to the Stanley Cup Final in their inaugural magical season in 2018.

The teams have already met this season back on Dec. 17 at Madison Square Garden. The Knights won in a shootout, 3-2, and for the remaining original Misfits — Jonathan Marchessault, Reilly Smith, William Karlsson, Brayden McNabb, Shea Theodore and William Carrier — it was a chance to renew acquaintances with Gallant and Reaves. So for the players, it may not be as emotional as it will be for the fans who were unable to say goodbye when Gallant was fired a couple of years ago and Reaves was not offered a contract extension last summer.

The atmosphere figures to be electric Thursday night. But it’s almost a preliminary for the main event on Saturday. That’s when beloved goaltender Marc-Andre Fleury returns to Las Vegas, this time as a member of the Chicago Blackhawks.

I was in Pittsburgh in 2018 the night Fleury returned to face the Penguins and the nearly two-minute tribute video had everyone in tears, Fleury included. I would expect a similar reaction Saturday when that video gets shown on the Knight-tron video board high above center ice and the fans shower Fleury with the love and affection you would expect.

For Golden Knights fans, that inaugural season was a fairytale, a Disney movie though the ending wasn’t Hollywood. But they will never forget those who made that dream season a reality.

Schmidt said after Sunday’s win that the ovation he received meant a lot to him.

“I spent some good years here and had a lot of fun,” Schmidt said. “This city means a lot to me. Our first year, everything that we went through, some of those things … they’re always a part of you.”

And so it will be come Thursday and again on Saturday, when the week reaches its emotional crescendo.

How will the Knights handle it? Robin Lehner probably won’t be at the opposite end of the ice vs. Fleury come Saturday, which is probably just as well. The 18,000-plus who will pack The Fortress will be chanting “Fleury, Fleury” early and often and while they will want the Knights to win, they’re not quite ready to let go of the player who embraced the city from the moment his name was a called in the expansion draft back in 2017 and endeared himself to the faithful during his four-year run on the Strip.

Back in 1975, the New York Rangers waived goaltender Ed Giacomin only to have him claimed by the Detroit Red Wings. When Giacomin returned to Madison Square Garden in Detroit’s next game, the chants of “Eddie! Eddie!” rained down from the blue seats and throughout the Garden to the ice, where Giacomin couldn’t hide the tears through his mask but had clear enough vision to backstop the Red Wings to a 6-4 victory.