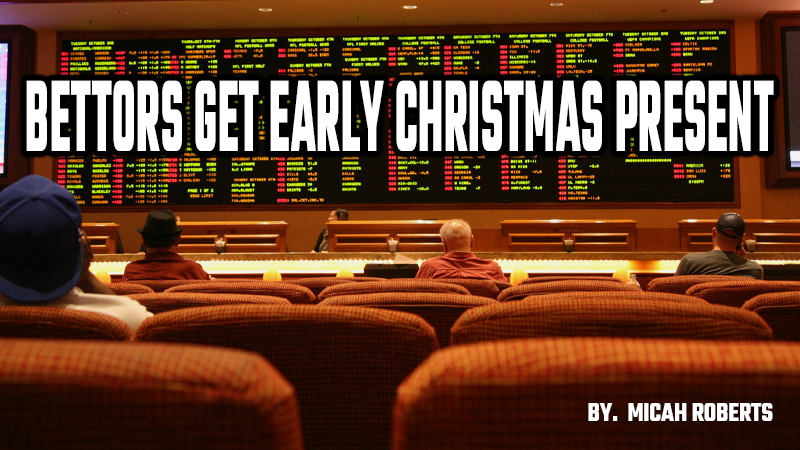 It was a Holly Jolly Christmas for bettors in Sunday’s NFL Week 14 action as favorites won 11 of the 12 games with 10 of those favorites covering the spread. That means coal in the stocking for the Nevada sportsbooks resulting in millions in losses.

The sportsbooks lost with straight bets, teasers, money-line parlays, side-to-total parlays, and lots of 8-team parlays. Check all the boxes of excuses other than operator error as the reasons why the sportsbooks lost so much. The bettors were correct on almost everything as eight teams favored by 6 points or more covered the spread, including all four double-digit favorites.

The average Joe loves favorites. They're attracted to high-scoring teams that have won them money recently, or they’re attracted to betting against bad teams. Both happened successfully on Sunday better than any other Sunday this season. It’s the fourth time the bettors have knocked out the Nevada sportsbooks.

Don’t worry, they’re not going out of business, they have plenty of money, but it’s nice to see the bettors have a great day collectively. I knew it was going to be a bad day and I hate bugging the sportsbook bosses on bad days so they can roll on about their losses, but they were ready for it and as frank as possible.

Ouch, the parlay cards. The local Las Vegas bet shops in neighborhoods off the strip do huge volume in parlay cards so, on big favorite days like Sunday, the cards have a larger effect than the strip properties.

Local joints like the South Point and Station Casinos must have felt an earthquake in their system when posting the Buccaneers’ 33-27 overtime win against the Bills, the final of the 11 day and afternoon games that carried all the risk forward to the Sunday night game. The Bucs were 3.5-point home favorites most of the week and dropped to -3 over the weekend as a sharp group was betting the Bills everywhere. Joe Public was all over the Bucs all week at any number. It’s Tom Brady and the Bucs are 5-0 at home winning by an average score of 38-16. Of course, the public likes those Bucs numbers.

How was the book atmosphere when Brady threw the winning TD pass in overtime to win by 6?

“Like the clock striking midnight on New Years Eve,” McCormick said, and that was before the Packers decision. “Oh, there’s a much bigger negative number upcoming on the Packers.”

The 11.5-point home favorite Packers looked sluggish early as the Bears jumped out to a 27-21 halftime lead, but won the second-half 24-3, just enough to get the cover and also getting well over the totals of 43.5. Overs would also contribute to losses on the day as they went 8-4. Joe Public loves an over. Put it all together on one Sunday, it’s bad news for the house.

“A total nightmare,” said Reno Atlantis sportsbook director Marc Nelson. “I think our only win was the Falcons game. The parlays are horrendous — a Packers cover is disastrous. The Bears covering is just a bad day. The Bears outright is still a loser but not too bad. The Packers cover will be by far the worst day in the four years I’ve been at Atlantis.”

The most popular public teams in ticket counts were the Buccaneers. Packers, Titans, and Cowboys, a sweet 4-team parlay for quite a bunch of bettors.

The Cowboys had more fans for a Washington home game than I've ever seen. The Cowboys even brought their heating benches from Dallas. The Cowboys closed as 6.5-point road favorites and won 27-20, thanks to a late extra-point miss by Washington. One missed extra point contributed to lots of public winning as a prominent leg in parlays..

“It’s ugly,” said BetMGM‘s Jeff Stoneback of their day. “Just one winner on the day for us. Can’t do much when favorites go 10-2 (ATS). The Chiefs were our only win.”

The Raiders held a team meeting on the Chiefs crest at the 50-yard line before the game and pumped themselves up with reminders of winning at KC last season. Then the game started and the Chiefs jumped out to a 35-0 lead.

The irony of last season's meeting and this season is Henry Ruggs III was the star last season and the Raiders have been awful since he killed a Las Vegas woman and her dog while driving under the influence at speeds over 100 mph. Chiefs win 48-9. The Raiders were once 5-2 and now they’re 6-7.

“We’re buried with parlays to the Packers,” said Westgate Las Vegas SuperBook VP Jay Kornegay. “Our worst games were the Buccaneers, Cowboys, and Titans. Our best was the Ravens, and I think we lost every other game.”

The Ravens were down 24-6 at the half and QB Lamar Jackson would miss the second half with an ankle injury. So of course backup QB Tyler Huntley would help the Ravens offense outscore the Browns 16-0 in the second half, and get the old backdoor cover with the majority of the bets on the Browns -2.5 and -3. Final score: Browns 24-22. The Browns have scored 7 total points in the fourth quarter of their last eight games.

Kornegay and the SuperBook couldn’t revel in the excitement of the book winning their only game by a backdoor, but he was still seeing the positives as he always does,

“The numbers should be much worse,” he said. “We were lucky it was one of the slowest Sundays.”

Merry Christmas and shop well my friends, Santa came early with the covers.