Win On Saturday, Push On Sunday 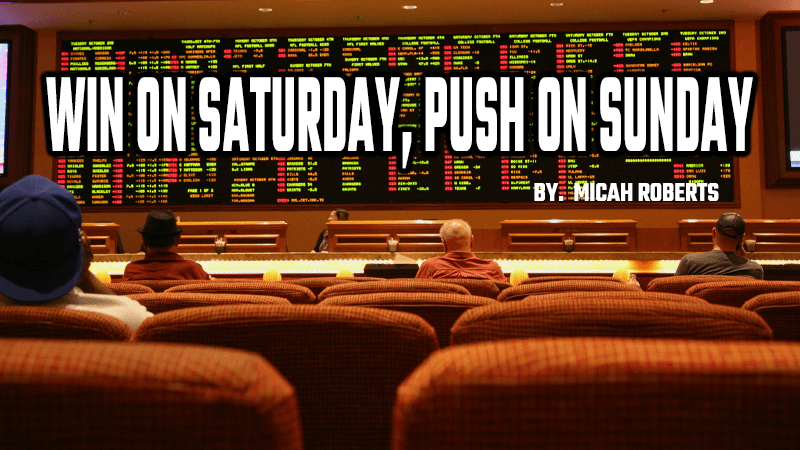 Let’s call Sunday’s Week 13 NFL action at Nevada sportsbooks a wash which is actually somewhat of a win for Joe Public because it isn’t another losing week.

But that comes after Saturday’s college football conference championship games where the sportsbooks' only collective loss was Michigan over Iowa. The public lost almost every other game on Saturday.

That pretty much sums up Saturday — jackpot for the sportsbooks, but the bettors grabbed more cash and came back strong on Sunday’s games and had the books on the ropes after the early games went 5-2 ATS.

“It all rides into tonight,” said McCormick on how they did Sunday. “Washington, Pittsburgh, and Seattle were saviors in the afternoon after a horrible morning. We need the Broncos to hold onto a very small win.”

The Broncos would lose 22-9 at Kansas City (-9) and stay under a total of 47. The Chiefs were the popular side and the cover tilted the day's win in favor of the bettor at some bet shops. Others were just small winners. The Chiefs have beat the Broncos 12 straight meetings.

“Small winner,” said BetMGM director Jeff Stoneback of their day. “The Lions, Chargers, and Dolphins were the big losers for us. We got all that back with Washington and then Seattle winning added a decent amount to make us a small winner on the day and we have no risk in the late game.”

The Washington 17-15 win at Las Vegas (-1.5) crushed millions in risk accrued from the morning games across the state. The Raiders were one of the most bet sides on Sunday next to the Colts and Cardinals. Wiseguys were on Washington, of course.

And then another popular side with the public, the 49ers -3 at a rainy Seattle, would go down 30-23. Sharps had bet the 49ers. The game flew over the total of 45.5 to end a nine-game under streak by the Seahawks. It’s the first win in four games since Russell Wilson returned from injury. He still looked clunky but had a hint of his old swagger we’ve been waiting to see again.

“We were a loser but mainly because a regular house player did well on the parlay option,” Westgate Las Vegas SuperBook VP Jay Kornegay said. “The Dolphins, Cardinals, Colts, and Rams were our biggest losers. It really picked up this weekend after many took last weekend off.”

The Dolphins won and covered their fifth straight game Sunday at home against the Giants who were starting Mike Glennon at QB because Daniel Jones had a neck issue. The Dolphins opened at -3 with expectations Jones would play but when he became doubtful the spread moved all the way to -7 with sharp money forcing the move. The public followed at any number because they liked the Dolphins 4-0 ATS thing in their last four trend. The Dolphins won 20-9

The Cardinals finally got QB Kyler Murray and WR DeAndre Hopkins back after missing three games and coming off a bye, but there was no rust as the Cardinals scored on the first drive with a 20-yard pass from Murray to Hopkins on fourth down and 2-yards to go. That play, in a cold and rainy Soldier Field, instantly sold me on the Cardinals making the Super Bowl. They’d win 33-22 and cover -7.5 while going over 42.5, a total that dropped from 46 because of the horrible weather.

The Colts (-10.5) would roll at Houston methodically destroying the Texans with a slow death, 31-0. The Texans defense played hard, but Jonathan Taylor mixed in with a few Carson Wentz passes is hard to defend. They go to 7-6, which sounds weak, but no one in the AFC wants to play the Colts in the playoffs. There it is, Colts vs. Cardinals in the Super Bowl, I said it.

The Rams won for the first time since Oct. 31 and ended a three-game losing streak by beating the Jaguars, 37-7, while also covering the spread (-13.5) and staying under the total of 48. Matt Stafford still looks junky at times.

The QB Stafford was traded for notched his first win in Detroit. Jared Goff was clutch in the Lions’ first win of the season throwing the winning TD pass as time expired. The Lions’ thrilling 29-27 home win over the favored Vikings (-7) also made them one of the best cover teams in the NFL at 8-4 ATS. Bettors noticed Detroit’s ATS record coming in and supported them in bets which were also coupled by a mistrust of the Vikings and QB Kirk Cousins who make things more difficult on themselves than has to be.

“The Lions stuck it to us today, believe it or not,” said Atlantis Reno sportsbook director Marc Nelson. “We had a guy hedging a suicide pool betting the Lions (for large money). The Cardinals, Buccaneers, Colts, Rams, Chargers, and Dolphins were all no good for parlays. We need the Broncos outright but will be a loser no matter what.”

Nelson got both his clientele’s favorite teams to lose, the Raiders and 49ers, and still lost on the day.

Overall, favorites would go 7-5 ATS in Sunday’s action with all five of the underdogs covering winning outright. The over would go 5-7. Great job on Week 13 guys and gals, keep it going.