Lehner Opts Out Of Olympics, But He Won’t Be Last 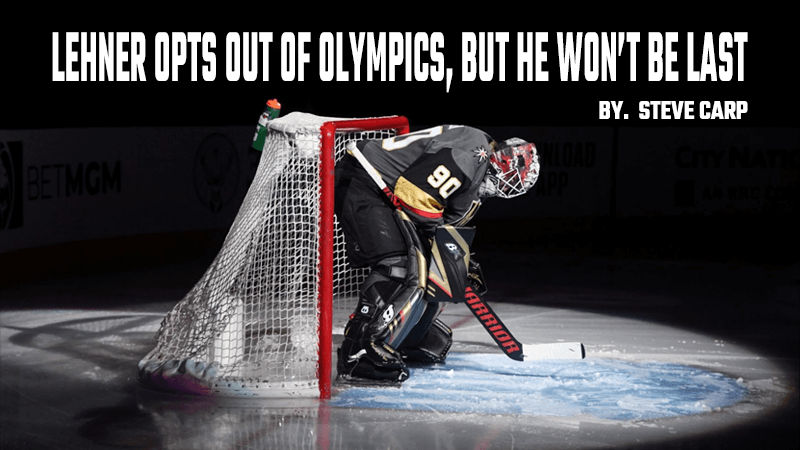 You had to be astute to look for this angle during Sunday’s Calgary Flames-Vegas Golden Knights hockey game. If you happen to be from Sweden, it was pretty easy.

Robin Lehner and Jacob Markstrom, that country’s top two goaltenders, squared off and after 60 minutes, it was Lehner and the Golden Knights who came out on top, 3-2. It had been widely assumed that they would form Sweden’s Olympic goaltending tandem come February in Beijing, China, so for the Swedish fans, Sunday carried a bit of intrigue to it.

Then came the bombshell announcement from Lehner in his postgame remarks that he has opted out of the Olympics. He cited the potential mental stress of COVOD-19 restrictions and quarantining as his reason for deciding not to play for Sweden.

Lehner has been a mental health advocate for years and he doesn’t mess around when it comes to those issues. He was sincere and forthright and he consulted with his doctor and family before making his decision. He is to be commended for it.

But as we get closer to February and new variants such as Omicron surface, there’s a distinct possibility Lehner won’t be alone. And when you throw in a potential boycott by the United States over the political climate in China, things could go haywire quickly.

Hockey is one of the showcase events at the Olympics, along with figure skating and skiing. If the hockey tournament, which will draw the largest amount of betting handle, finds itself shorthanded, altered or even canceled, it will have a severe negative impact on the Games.

The NHL’s players, not the league, wanted to participate in the Olympic. It took a lot of negotiating to get the NHL back on board after it skipped the Olympics in South Korea in 2018. Most, if not all of the owners, are not thrilled with the idea of empty arenas in the middle of the season, not to mention the risk of their participating players getting injured, as was the case with John Tavares, who injured his knee playing for Canada in 2014 at Sochi, Russia. The Islanders, Tavares’ team at the time, had been playing well prior to the Olympic break. Then Tavares got hurt, the Isles fell off the edge of the cliff and missed the playoffs.

For Lehner, he can’t afford the risk of getting hurt. The Golden Knights are counting on him to play close to 60 games this season and traded Marc-Andre Fleury in the off-season as a show of loyalty to Lehner. If he were to get hurt in the Olympics, it would severely compromise Vegas’ NHL season and while it’s true he can get hurt playing for the Knights, that’s something they can live with since he’s being paid to perform for them.

One thing is certain: Lehner may have been the first NHL player to opt out of Beijing, but he certainly won’t be the last.