Small Win For Books To Close Out November 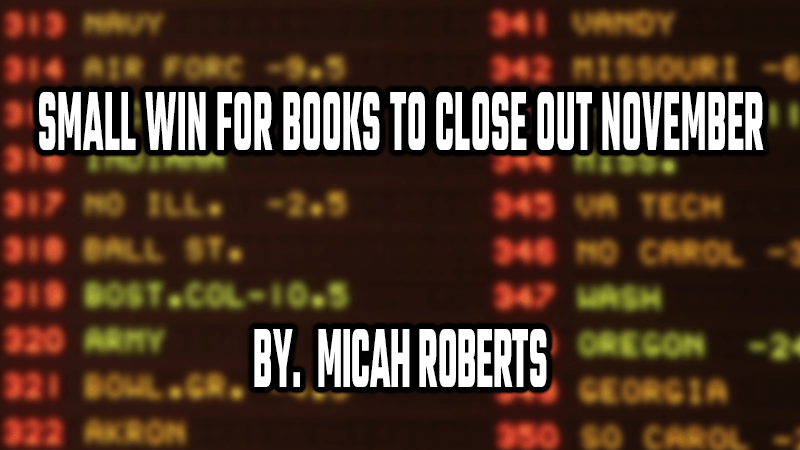 No one is more excited to see the calendar flip to December than the average Joe bettor who got crushed all four NFL Sundays, which may lead to Nevada sportsbooks having one of its best November’s ever. In Week 12 action Sunday, favorites would go 6-5 ATS with the over going only 5-6, just enough parity to really mess up someone’s parlay.

The public was all over the Patriots to cover -7 at home due to several key players being out against the then-No. 1 seeded Titans, and they rolled as expected, 36-13, to also get over the total (43). It was handicapped perfectly, great job guys and gals. But the only problem is they didn’t get many of their other popular teams to cover as we saw happen for a three-week stretch ending in Week 7 where the books got hammered by Joe Public.

The sportsbooks did well in Week 12 but it was the smallest Sunday win of the four November Sundays.

“We were a very small winner on Sunday,” said Station Casinos VP Jason McCormick. “The Jets, Giants, Bengals, and Broncos helped us out but we really got beat up the Patriots, Falcons, Packers, Packers-Rams over, and the 49ers.”

The public loved the Eagles who were the side with the highest ticket count aside from the Patriots. The Eagles were talking playoff possibilities with Jalen Hurts appearing to improve each week, but the Giants at home proved too much in a 13-7 win. The Eagles were bet from 3.5-point road favorites to -4 by kickoff.

“We ended up being a small winner today and need the Ravens tonight,” said BetMGM director Jeff Stoneback. “The Patriots, Falcons, and Buccaneers covers were bad while the Dolphins, Packers, and Broncos were good.”

The Ravens survived an ugly 16-10 home win against the Browns and got the full cover with a Justin Tucker 49-yard field goal with 1:10 remaining in the game. The public thought this was a good spot for the Browns and the number dropped from Ravens -4.5 to -3 by kickoff.

The weird part about Week 12 action is that the public abandoned one of their steady reliables all season because the Rams were on a two-game losing streak and came off a bye while Packers QB Aaron Rodgers put fear in their minds because he had COVID-toe, something new that no one heard of. It scared bettors off the Packers who are now an NFL-best 10-2 ATS after their 36-28 win in which Rams QB Matt Stafford threw a pick-6 for the third straight game.

The Rams are now 7-4 straight-up and 4-7 ATS. The Lions still haven’t won yet with Jared Goff at QB, but they’re 7-4 ATS after covering Thursday against the Bears. Los Angeles local sportswriters aren’t as hard-hitting and in your face as Philadelphia or New York is, but someone needs to call out Stafford on his recent failures. The Goff for Stafford trade was supposed to be an upgrade for the Rams, but three straight losses say otherwise.

“We were a small winner today,” said Westgate Las Vegas SuperBook VP Jay Kornegay. “It was our quietest NFL Sunday of the season. The Buccaneers and Giants were our worst games and the Broncos and Dolphins were our best.”

The Colts were leading the NFL with a +15 turnover margin and after Sunday's 38-31 home loss to the Buccaneers, they are still leading but only at +12. Leonard Fournette led the way with 4 TDs to help overcome a 24-14 halftime deficit. In addition to three fumbles for the Colts, Carson Wentz also threw two interceptions. The Bucs opened -2.5 and were bet up to -3 and closed at -2.5 -120. It was the Bucs’ first road cover of the season.

The Panthers had lots of love heading into Sunday’s game at Miami going from pick ‘em to -2 to -1.5 by kickoff. Cam Newton is back and he’s fired up was the thought process, and he scored in the first quarter, but he has nothing on his passes. He tossed two first-half interceptions and was pulled from the game for backup PJ Walker after completing just 5-of-21 on the day. The Dolphins did everything well and won 33-10 for their fourth straight win.

“It was a very good day,” said Reno Atlantis director Marc Nelson. ”We could have gone home after the Giants won outright. The only bad game for us was the 49ers.”

Yes, Reno is still 49ers (-4) country and the 34-26 win over the pesky Vikings helped cash a bunch of tickets for Nelson’s clientele that the southern books didn’t see.

The Vikings games this season always end with some kind of dramatics and now they’re on the short end of it at 5-6 straight-up. They should be battle-tested at this point, but the 49ers took care of business just as they did to the Vikings in the playoffs last season.

Another team that is always involved in fantastic finishes is the Chargers, who were laying -2.5 at Denver. But the Broncos held serve at home with a 28-13 win aided by two interceptions by first-round pick Patrick Surtain II, including one for a TD. The Broncos played well, but not extraordinary, which presses more questions about the direction of the Chargers.

One week, the Chargers look unstoppable and the next week they lay an egg. They’re now tied with Denver and Las Vegas at 6-5 in the AFC West and Denver can really make some waves because they play division leader Kansas City in Week 13.

The Broncos are the best under team at 9-2 this season tied with Jacksonville.

So let’s get going again in December. Hold your head up high, play your teams, and don’t handicap in retrospect. Don’t change your patterns because that’s what the sportsbooks are hoping for, and let’s not bet against the Packers again until they show they don’t cover.