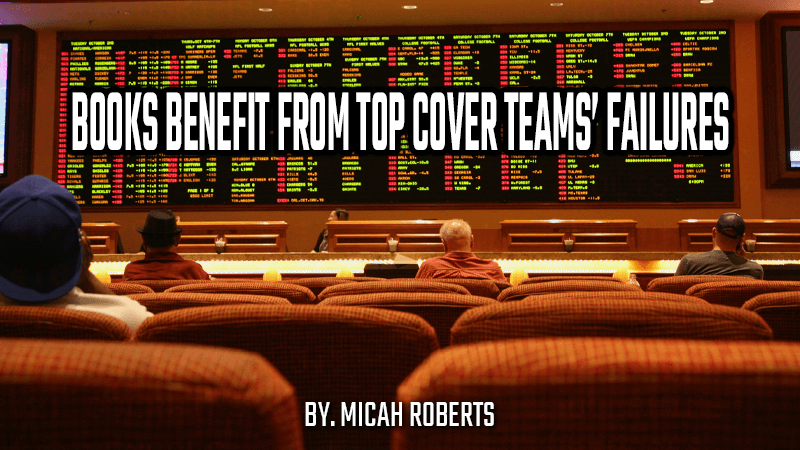 The top three cover teams in the NFL were beaten straight up in Sunday’s Week 11 action, which naturally transformed into a winning day for the sportsbooks for the fourth straight week following three straight winning weeks by the betting public.

“If the Steelers cover (Sunday night), it’ll be the best day of the whole year,” said BetMGM director Jeff Stoneback. “Our only two losers were the Eagles and Chiefs, and the Chiefs loss was very small.”

The Steelers did cover +6.5 in a 41-37 loss thanks to Pittsburgh getting a 27-point fourth quarter. The Chargers opened -3.5 at the Westgate Las Vegas SuperBook and sharps laid it at -3.5 and -4.5 and the number ran to -6.5 by kickoff. The Chargers and Vikings seem to be in the same sweatbox late in the game every week.

Just about everyone running a book in Nevada had the same type of winning day.

“We are up a criminal percentage,” he said with a chuckle.

The criminal investigation was over quickly as detectives noted the Packers, who were 9-1 ATS, lost as 1.5-point road favorites at Minnesota, 34-31. Also noted was that the Cowboys, who were 8-1 ATS, lost 19-9 at Kansas City who were laying less than a field goal (-2.5). The total of 56 also gave the opinion that it would be a shootout.

And then there was the most bet parlay side of the week that had also the most tickets written. The Titans had won six straight and were 7-3 ATS on the season, but fell at home to the Texans, 22-13, who raised their overall record to 2-8. Few took the +380 on the Texans money-line to win outright.

The Jets are 2-8 SU and ATS with one of those conquests happening in an overtime win against the Titans. Can we trust the Titans again? They can beat anyone, but also can be beaten by anyone.

What the hell kind of bizarre week did the casual bettors have to deal with in Week 11? Why would the betting gods be so cruel after being so kind for three straight weeks?

The Bears got two sizzling TD passes from backup QB Andy Dalton after starter Justin Fields got hurt. Ravens QB Lamar Jackson was announced 90 minutes before kickoff he wouldn’t be starting and second-year back-up Tyler Huntley would make his first NFL start. The Ravens closed at -1.5, a 5-point drop from what it opened. Huntley made a huge play in the fourth quarter and the Ravens won 16-13.

Ravens win, Bears get the money even though I graded it a Ravens and favorite covering because of the closing number.

Favorites would go 6-7 ATS with five underdogs winning outright and the under won the day with an 8-5 mark. It’s the ideal mic for a winning Sunday for the house, but you still need a few of the heavyweights to fall to have that monster Sunday as happened Sunday.

The Bills were the third-most-popular play in tickets written parlayed laying -7 at home against the Colts. The Bills No. 1 defense couldn’t stop Jonathan Taylor who had over 200 rushing and receiving yards and four TDs. The Colts were never in doubt with a dominating 41-15 win which paid out at +250 on the money-line at the Las Vegas SuperBook.

The Bengals’ 32-13 win at Las Vegas had mixed results for the sportsbooks, but the Bengals went from pick ‘em to -2.5. The total was also bet over and it stayed under 51 due to several miracles throughout the game.

“Washington, the Colts, Vikings, and Texans were great in the morning games and the Cardinals in the afternoon games was also great,” said Station Casinos VP Jason McCormick. “Under in the Raiders game and the Chiefs were also solid.

The Cardinals have been fooling everyone with their use of the word questionable the last three weeks without QB Kyler Murray and WR DeAndre Hopkins. Last week, Hopkins announced out early in the week but waited until game day again to announce Murray was also out. But backup QB Colt McCoy won again on the road for the Cardinals making him 2-1 as a starter without Murray. On Sunday, they were at Seattle and dominated a low-scoring game, 23-13, where Seahawks QB Russell Wilson still looks shaky after an awful debut off injured reserve last week.

The Cardinals were -2 to begin the week, a lean to Murray starting but not the full number if he was playing. By kickoff on Sunday, the Seahawks closed -5 at Circa Sports.

“Very good,” South Point’s Chris Andrews said of their day. “It could’ve been better but we had a big room customer who beat us up a bit.”

And we should also note that Tim Boyle made his first-ever NFL start at QB for the Lions at Cleveland and the number opened Browns -10 and closed -14. It wasn’t necessarily because of starting QB Jared Goff being out as much as people just like picking on the winless Lions, but the Lions had the last laugh in a 13-10 loss to the Browns. It was the Lions’ sixth cover in 10 games.