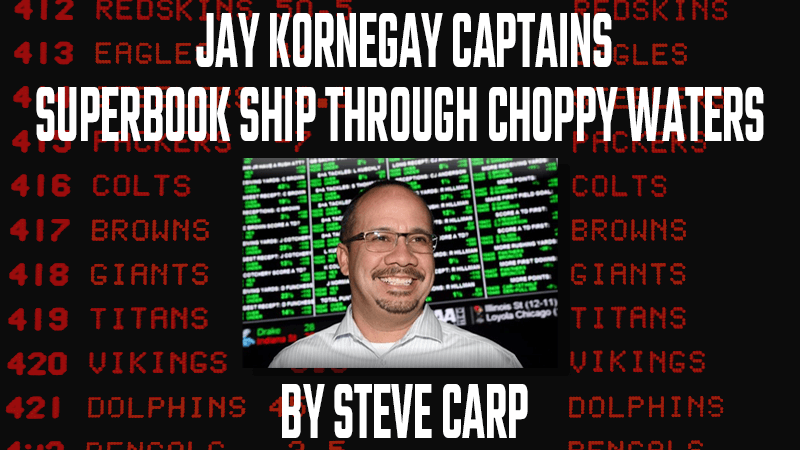 It’s late on a Tuesday morning, usually a time for relative quiet at the Westgate Las Vegas SuperBook. Normally, there’s some soccer, maybe a tennis tournament in Europe and three or four race tracks running.

But this wasn’t your normal Tuesday. It was the start of the college basketball season and there’s a long line of bettors waiting to get down.

But Jay Kornegay doesn’t mind. As the Westgate’s Vice President of Race and Sports operations, he’s glad to see his place busy. And considering what his industry has been through the last two years during the coronavirus pandemic, being up and running with the doors open is something he doesn’t take for granted.

“We’re still on our way back to normalcy,” he said. “There’s still a mask mandate by the state that everyone has to abide by. Some people are hesitant to wear a mask so it restricts our path to normalcy some. But overall, we’re feeling the energy again that we had before (the pandemic). We’re not 100% back, but we’re inching toward it.”

Kornegay and his trusty team of Jeff Sherman and John Murray along with the entire staff have kept things moving at the SuperBook, an iconic property that has been in operation since 1986 when the Las Vegas Hilton invested $17 million to create what was then the world’s biggest race and sports book.

It remains a popular place to watch and wager on sports and horse racing and the property’s SuperContest has morphed into several contests. The SuperContest, which costs $1,000 to enter, requires you pick five NFL games each week. Whoever picks the most winners and has the best record wins.

“We felt like we needed to tweak things a little,” Kornegay said. “John Murray and I came up with the idea to help improve the SuperContest and it’s great for the customers.”

Nearly 2,000 participants signed up this year. There’s a separate contest in Colorado, where the Westgate has mobile sports betting. In addition, the Westgate has a presence in New Jersey and will soon have its mobile app available in Arizona.

“New Jersey has exceeded our expectations. We’ve been open only six months and it has been great. It has proven to be a strong market.”

When the SuperBook app launches in Arizona next month, it will do so having forged an alliance with the Fort Mojave Casino. Arizona law stipulates that a sportsbook operator must have a contract with an Arizona casino. And while there won’t be a retail sportsbook at the start, Kornegay anticipates it will likely be a reality at some point.

“We’re very excited about being in Arizona,” he said. “We think it will do somewhere between New Jersey and Colorado.”

And while other properties are advertising heavily to promote their mobile apps, the SuperBook isn’t as gaudy in letting people know about its product.

“We have a different philosophy,” said Kornegay, who has been at the SuperBook since 2004 after spending 15 years overseeing the book at the old Imperial Palace on the Las Vegas Strip. “For us, it’s slow and steady. We have a recognizable brand that is respected throughout the industry. I think consumers trust our brand and we have a great relationship with the regulators in the jurisdictions we operate in. Compliance is a top priority for us. We want to make sure we’re following the rules.”

As the NFL begins the second half of the 2021 season, Kornegay said he expects the roller coaster ride to continue. The books started out well, had a three-week run in October where the bettors got the best of them, but have rebounded the last couple of weeks.

“It’s like that every year,” he said. “You have your ups and downs and every week is different. But we’re still here and that’s not going to change.”

And just wait until the Super Bowl matchup is announced in January. That’s when Kornegay and his staff will shift into high gear with their book of Super Bowl proposition bets, arguably the largest menu of wagers on the big game you’ll find anywhere. But that’s still a ways away. For now, there’s the NFL, college football, college basketball, the NBA, the NHL, soccer, golf and tennis on the docket and that’s enough to keep Kornegay and his staff busy and give their customers more than enough to wager on.

“It never stops,” he said. “The NFL is as unpredictable as ever. It’s tough to predict.”