Which Raiders, Which Chiefs Show Up Sunday Night? 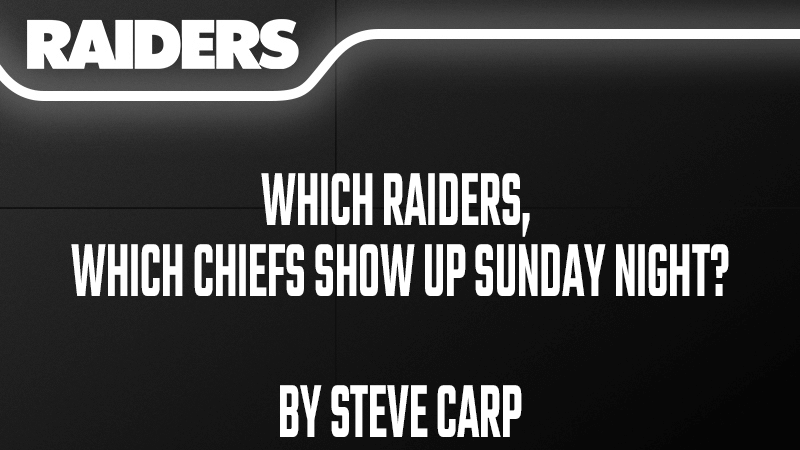 This Sunday, Kansas City visits Las Vegas. And the potential is there for an outcome on either end of the spectrum. We could get an amazing game or this could be a slopfest. It all depends on the play of the quarterbacks.

The line has the Chiefs as a small 2 1/2-point road favorite. That tells you all you need to know that this game is an enigma, even for the oddsmakers. The betting public appears equally confused as the money has yet to appear one way or the other.

Something doesn’t seem right with the Chiefs’ Patrick Mahomes. He doesn’t appear to be himself. Maybe it’s because he has been working behind a patchwork offensive line. maybe opposing defensive coordinators have figured out the right scheme to make him uncomfortable and force him into mistakes.

Gus Bradley, the Raiders’ defensive coordinator, gets to try his hand at stymying Mahomes and the Chiefs offense. He does so without DB Damon Arnette, who was released by the team earlier in the week. The Raiders are actually going in the right direction defensively but this is Mahomes we’re talking about. He may be a funk, but he still has Tyreke Hill and Travis Kelce to throw to and he can still make plays on his own.

Then there’s Mahomes counterpart, Derek Carr, who is coming off an abysmal performance last Sunday in the Meadowlands against the New York Giants. The raiders connected on just one of six visits in the Red Zone against the Giants and Carr missed badly on a pass to a wide-open Darren Waller in the end zone, overthrowing the tight end on what was an easy TD.

Carr claims he was not distracted by the release of wide receiver Henry Ruggs in the aftermath of the DUI incident that resulted in the death of a 23-year-old woman and her dog. He may not have been distracted but he sure didn’t appear to be focused.

He gets a chance for redemption against a Kansas City defense which has allowed an average of just over 25 points a game but has played well in its last two games, both wins — a 17-7 win over the Giants and a 13-7 win at home over the Packers, who were without starting QB Aaron Rodgers.

Has the K.C. defense turned the corner? If Carr is able to sharpen things back up and bounce back, we’ll have a much better idea. He is far superior to Daniel Jones and Jordan Love and playing at home should give him and the entire Raiders team a boost.

This is a big game for both teams. Kansas City is third in the AFC West at 5-4 and the Raiders are tied for first with the Chargers at 5-3. Depending what the Chargers do at home Sunday against Minnesota, the Chiefs could find themselves in first place when the get on the plane to go home.

The raiders have had epic collapses after strong starts the last two seasons and they are battling letting that doubt creep into their collective psyche as they try to get back on track for the start of the second half of the season.

Getting points at home is a tempting offer. Especially when it’s a division game. But there’s the Mahomes Factor and he doesn’t need to raise his game all that much for Kansas City to win. But they’re 2-7 against the spread and are currently on a three-game losing streak ATS. In addition, the Chiefs are riding a four-game streak to the under (the total is 52 1/2).

But let’s not forget Andy Reid’s team has won two in a row and three of its last four. So if you’re taking the points Sunday Night with the Raiders, be aware of what you’re going up against — a team that hasn’t forgotten how to win and a quarterback who can still find the resourcefulness to rally his team if need be.