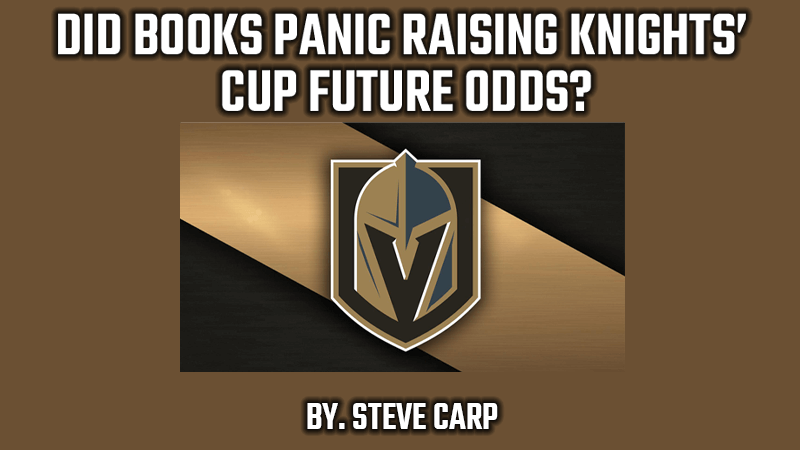 Prior to the start of the 2021-22 NHL season, the Vegas Golden Knights were among the favorites to win the Stanley Cup at some Las Vegas sportsbooks. Even after trading Marc-Andre Fleury and Ryan Reaves, the Knights were still one of the favorites in the future book.

Then came the start of the season and the slow start, including four straight losses, equalling the worst stretch in the five-year history of the franchise. In the process, the team lost several regulars to injury, most notably Max Pacioretty and Mark Stone, their top two returning scorers from last year’s team which made it to the semifinals for the second year in a row.

Suddenly, the Knights were no longer a favorite. They had opened 5-1 back in July, were still 5-1 in late September and into Opening Night on Oct. 12. But the injuries started to reach epidemic proportions. Alec Martinez missed some time. So did Mattias Janmark, Nicolas Roy, William Carrier and Brett Howden. Nolan Patrick then went out of the lineup as did Zach Whitecloud. Then it was William Karlsson.

As the injury count rose, so too did the price on Vegas to win it all. It went to 10-1. Then 12-1. And had the team not put the brakes on the four-game skid and return to playing .500 hockey, who knows how high would the number have gone?

Then on Thursday came the blockbuster news of the Knights trading for Jack Eichel. Vegas sent Alex Tuch, Peyton Krebs, a second-round pick and a third-rounder to Buffalo for Eichel, who, when healthy is one of the premier players in the game.

With that news came a new set of odds. The Knights were back into single digits at 8-1 at the South Point and Rampart sportsbooks. Colorado is the current favorite at virtually every future book in town from anywhere from 4-1 to 6-1.

Mind you, Eichel sill has to undergo a unique disk replacement procedure to alleviate his neck injury suffered last March. There’s no guarantee it’ll work but everything seems to indicate that Eichel and his people have done extensive homework on the procedure, which will be done next week in Colorado. He is expected to need three-plus months to recover which would likely have him back on the ice in early March, perhaps in time for when the Knights play at Buffalo on March 10.

So, it begs two questions:

1. Did the sportsbooks overreact to all of the injuries the team had suffered the first couple of weeks?

As to the first question, one sportsbook director who asked to remain anonymous said: “It was total panic. The season’s only a couple of weeks old. They’re going to get all their guys back and when they do, they’re going to be very tough, especially in that division (the pacific) and assuming Eichel’s healthy and good to go, he changes everything for the Knights.”

Think about what Eichel does. He gives the entire lineup a boost. It allows center Chandler Stephenson to play against third-line opponents rather than first-liners. Eichel makes what is currently the worst power play in the NHL something to fear, especially with Pacioretty, Stone and Alex Pietrangelo, teaming up with him.

As for the second question, 8-1 still is pretty good (they’re 9-1 at the Westgate Las Vegas SuperBook as of Friday). Not as good as 12-1 or 10-1, but it’s better than 5-1. If you jumped on Vegas when the price went to double-digits, congratulations. You may have snagged a real bargain.

If they every get back to full strength and figure out a way to be compliant with the salary cap without having to break up the roster to do so, the Golden Knights are going to be a tough out. But no one can predict injuries and the way this season has gone to date, perhaps we should brace ourselves for more doctor visits.

However, don’t be afraid to grab a piece of the Golden Knights in the future book. It may turn out to be a profitable move.