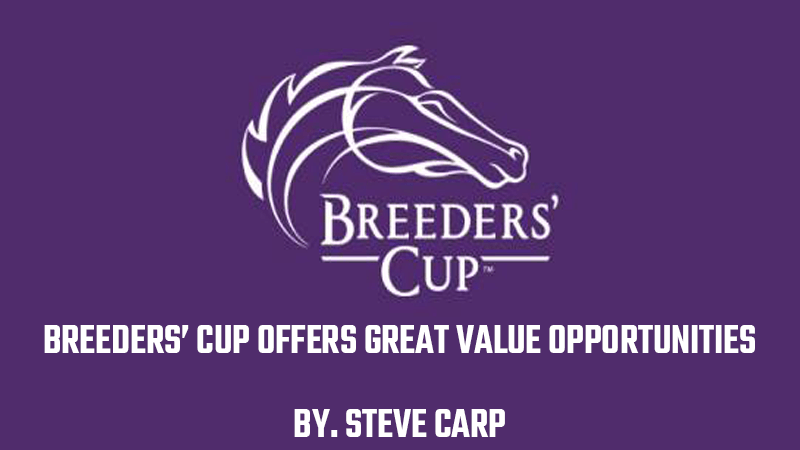 You don’t have to be a horseplayer to appreciate value. And for this weekend, there’ll be value galore as the Breeders’ Cup World Championships are held at the beautiful Del Mar Thoroughbred Club.

If you’re not accustomed to playing the ponies, don’t fret. The Breeders’ Cup is about the best vs. best, male and female, dirt and turf, young and old. It’s full fields and lots of juicy prices.

There’s five races Friday, nine more Saturday, culminated by the $6 million Classic. So there are no lack of betting opportunities. Yes, you could get lucky by picking blindly, but doing some homework never hurts either.

Del Mar is not an easy track to handicap. Things change over the course of an afternoon. Horses that are winning on the front end early in the card suddenly are hitting a wall later in the day. Same for the turf, though with Del Mar’s short stretch, it’s hard to come from out of the clouds and win on the grass.

One theory is that the track, which sits just off the Pacific Ocean, is susceptible to the changing tides and it impacts the racing surfaces. Another is Del Mar’s track is deeper than it used to be for safety reasons after the track had a rash of equine injuries a few years ago, thus, it’s naturally slower.

When they ran the Breeders’ Cup there in ’17, only one of the 13 winners went wire-to-wire. That was Gun Runner, who was sent to the front by Florent Geroux and stayed there the entire 1 1/4 mile trip. The other 12 came from near the lead, mid-pack or off the pace to win.

Does that mean speed won’t prevail this weekend? Del Mar has been kind to speed in the past but what happens in July and August doesn’t necessarily repeat itself in November. So bear that in mind when you handicap.
And with these big fields, the best horse doesn’t always win. You miss the break, you caught in traffic, a hole never opens up until it’s too late. Even the best jockeys screw up.

Here are a few things I look for in handicapping the Breeders’ Cup every year. Sometimes it pays off handsomely, sometimes I completely miss the mark:

Home-court advantage: Look for the trainers and jockeys who traditionally do well at Del Mar. Trainers such as Peter Miller and Philip D’Amato are usually near the top of the trainer standings as is the ubiquitous Bob Baffert. Another top conditioner who sometimes gets overlooked is Michael McCarthy. He trains my friend’s horse Smooth Like Strait, who will run in the $2 million Mile on the turf Saturday and has a legitimate shot.

As for the jockeys, Flavien Prat is the current reigning king of Del Mar. He knows every inch of that track and he’s very talented. Umberto Rispoli has established himself as a top rider after coming over from Italy a couple of years ago. He gets the most out of his mounts.

Euros on Turf: If you follow horse racing and the Breeders’ Cup, you are well aware of the success horses from Europe, specifically from England, have had in the turf races. They usually come over to the States very sound because they are not overworked and are not on medication nor are they geared for speed. That doesn’t mean they’re not fast, just they have a different mindset across the pond when it comes to preparing their horses to race.

Aidan O’Brien and Dermont Weld are well-known trainers and you should look closely at their runners in the turf races. One other conditioner not to overlook is Charlie Appleby, who has yet to win a Breeders’ Cup race but is having a tremendous year and has some talented runners entered.

Ride the hot hand: The best jockeys are going to be riding at Del Mar and they will be duking it out as they come over from around the world to compete.

Aside from the aforementioned Flavien Prat and Umberto Rispoli, the Ortiz brothers, Iran and Jose, who seem to win every race on the new York circuit (they don’t but it feels like they do), will be at Del Mar. Irad brought home Bar of Gold in 2017 and paid $135.40 for $2. Consider using them in your exotic bets.

Hall of Famers Mike Smith and John Velasquez seem to bring their ‘A’ game to the Breeders’ Cup every year. Johnny V had two winners during the 2017 Breeders’ Cup.

Two American riders who you should look at are Tyler Gaffalione, who has had success in Florida, Kentucky and New York and is a top-notch rider, and Rafael Santana Jr., who rides for Hall of Fame trainer Steve Assmussen. If their horses are live, they can be getting their pictures taken in the winner’s circle.

As for the jockeys coming from overseas, Ryan Moore, who rides in England, is really, really good. So are William Buick and Frankie Dettori. Do not be afraid to bet on them, especially in the turf races.

If you’re worried about weather, don’t be. It’s going to be in the mid-60s with light winds and just a 5% chance of precipitation. Also, Del Mar will be running races prior to the start of each day of the Breeders’ Cup and it may give you an indication as to how the surfaces are playing. But as I said earlier, this track has been known to change over the course of an afternoon so keep that in mind as you handicap.

Here are some plays I’ll be making:

Juvenile Turf — Modern Games. I mentioned Charlie Appleby and William Buick earlier and this 2-year-old has won two straight and appears to be coming into hand. He’s owned by the powerful Godolphin Stable and is 5-1 in the morning line. Having the rail is no bargain but at a mile and he is untested at the distance, Buick will have time to navigate and make a powerful late run and should handle the extra furlong.

Juvenile — Corniche. Bob Baffert has two horses entered here and even though Corniche is the lower price with a morning line of 5-2, I’m leaning to him instead of Barossa, who is 10-1 and is 0-for-2 at Del Mar. Corniche is 2-for-2, has a Grade 1 win at Santa Anita, broke his maiden at Del Mar on Sept. 4 and has won at the 1 1/16 mile distance. Yes, he has drawn outside at Post No. 12 but I like that Mike Smith is riding and he knows Del Mar as well as anyone. My lone concern is trying to make the lead from the outside. There’s a lot of speed inside of Corniche, including the Chad Brown-trained Jack Christopher, who  drew the rail and is the 9-5 morning line favorite.

Juvenile Turf Sprint — Armor. They don’t run a lot of 5-furlong races in Europe but this 2-year-old has two wins at the distance and Ryan Moore, who will ride him Friday, was aboard for both of his wins. He cuts back in distance from his last start at 6 furlongs where he was a late-closing third, missing by just 3/4’s of a length. He’ll be a square price (6-1 morning line) and breaks from the No. 7 post.

Dirt Mile — Ginobili. He’s 3-for-4 at Del Mar, has run a 104 Beyer Speed Figure, has a good post position in No. 3, is trained by a very capable conditioner in Richard Baltas and Drayden Van Dyke has home field advantage as part of Del Mar’s jockey colony. He’ll be close to the lead and if Life Is Good falters, he’s the one. Ginobili is 4-1 in the morning line. Hopefully we get that price or better.

Turf Mile — Space Blues. I go back with Charlie Appleby and William Buick here in a race loaded with speed and a horse who will be flying late. He’s 4-1 in the morning line and has won two in a row, including a Grade 1 at Longchamp in France. Don’t panic if he’s in the back after the gate opens. That’s where he’s accustomed to being. Hopefully, he’s not too far back and the turf course isn’t playing to speed.

Distaff — Letruska. I’ve fallen in love with her. She was so impressive winning the personal Ensign at Saratoga and followed that up with a wire-to-wire win at Keeneland in theSpinster. Both were Grade 1 races and Irad Ortiz Jr. fits this horse like a glove. The only drawback? She’ll be the likely favorite as Letruska is the 8-5 morning line choice.

Classic — Essential Quality. I’m a Knicks fan but I am not a Knicks Go fan. He disappointed me early in his 3-year-old campaign and I jumped off the bandwagon. If he wins, God bless him. I’m looking for someone who can close in a race that is going to have a lot of speed up front engaged in a hotly-contested pace. Essential Quality won the Belmont Stakes in June and the Travers at Saratoga in August. He’s had time to recover while training at Churchill Downs in Kentucky and Brad Cox knows how to get a horse ready. Jockey Luis Saez has had a great year and the horse has a great post in No. 4. My lone regret is the 3-1 morning line price. Hopefully he drifts up as the locals will back Hot Rod Charlie, who is 4-1, and Baffert’s Medina Spirit, who is also 4-1.