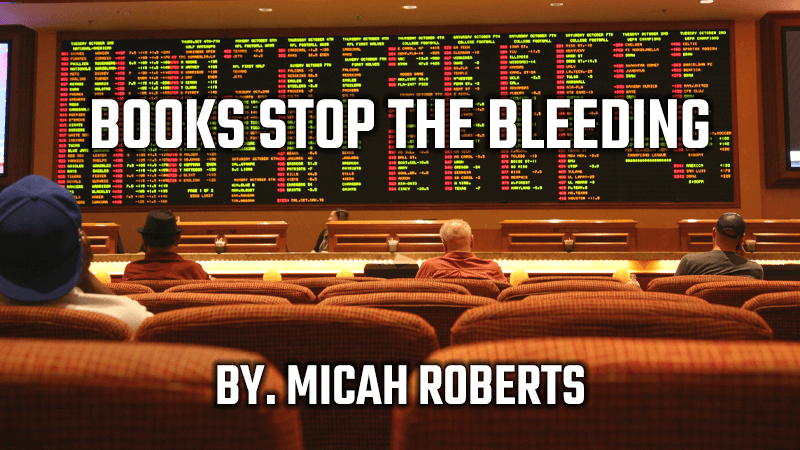 We all knew it had to end at some point, but we wanted more.

The gravy train that was three straight weeks of burying the sportsbooks is over, and it wasn’t one of those “We did O.K.” or “A ham sandwich” kind of day. It was a resounding ass-whooping the public took in Sunday’s NFL Week 8 action.

The last three weeks it’s been as easy as picking your favorite teams, then betting against the teams you hate and then cashing a few easy five-team parlays, hitting all the teasers where some games were all-way winners.

But not in Week 8. It was a vicious tear of the band-aid. It happened fast and the worst part is that Joe Public had more betting cash in their pocket after winning the last three weeks that some doubled their bet amount.

Three straight weeks a winner and now people are high rollers. It’s been going on like that forever in Las Vegas. When Joe Public wins, the rush is so exhilarating that he has to have that feeling again, immediately, and the sportsbooks get back what they lost and then sometimes more.

“The key to any winning day, J-E-T-S Jets, Jets, Jets,” a jubilant Station Casinos VP Jason McCormick said. “The Patriots and Saints money-line wins were also solid but the Jets were the awesome sauce. The Dolphins, Jaguars, Texans, and Washington’s continue to be great bet-againsts by the public.”

The Jets’ improbable 34-31 home win against the Bengals, who were favored by -11.5 points, did the most damage because it wiped out most of the teasers, big money-line parlays and point spread parlays. Jets Backup QB Mike White would complete 37-of-45 passes for 405 yards and 2 TDs.

How did this happen? It’s been a train wreck all season with rookie second overall pick Zack White at QB and all of a sudden in Week 8 the offense clicks with another QB named White.

The other big house win was the Saints’ 36-27 win at home against Tom Brady and the Buccaneers (-4) who are now 0-4 ATS on the road. Jameis Winston started at QB for the Saints but after a season-ending knee injury, backup QB Trevor Siemian came in to save the day and manage the win after the Bucs had taken a 27-26 lead. Whatever teasers weren’t beat out by the Bengals loss were taken out by a Bucs loss.

“Our best Sunday of the year through the morning and afternoon games,” said Westgate Las Vegas SuperBook VP Jay Kornegay. “If we get the Vikings, it will be a five-star day.

Cowboys backup QB Cooper Rush started for the Cowboys at Minnesota Sunday night and led the Cowboys to a 20-16 to keep them undefeated against the spread at 7-0. The total stayed under 52. It ended up being a four-star day for the SuperBook.

The Cowboys originally opened up as 1.5-point road favorites with QB Dak Prescott questionable. If he plays the game goes to -3 or -3.5. If he doesn’t play it goes to Vikings -4, and it did after he was announced out about 2 hours before the game, but the game closed Vikings -3.

“It was a great day,” said BetMGM director Jeff Stoneback. “The Saints and Jets were huge. Maybe the best ever day.”

The best ever talk is some serious discussion to throw a random NFL Sunday into. Stoneback has been in the business forever, as in 35 years. I wrote tickets for him back in the day at Circus Circus in the early 1990s.

A company man, he’s seen the transition from Circus Circus Enterprises to Mandalay Resorts to MGM-Mirage to MGM Resorts. And now BetMGM where he holds all the cards in the Lion company because he’s the only guy with the hard-to-get Nevada Gaming license. He tried to retire before the football season started, but they had no one within the department with a license so MGM Resorts CEO William Hornbuckle gave Stoney a nice pay upgrade and he’s staying for a while longer.

Stoneback has seen it all over his years but actually losing three NFL Sundays in a row as he just experienced, he can’t recall. Bad months? Lots, but three straight losing Sundays he doesn’t remember. But without hesitation, he’s already throwing Sunday’s week 8 win in the greatest of all-time category.

I don’t ask for the actual win in dollar amounts, that’s left for me to put the pieces to the puzzle. The dollar amount is company business, but to me, one of the best days ever for the MGM brand would be in the $3 million-to-5 million category.

After seeing veterans like Patrick Mahomes and Jared Goff failing miserably this season it was a pleasure to watch cast-offs and journeyman QBs have their day in the Sun. In addition to Cooper Rush, Trevor Siemian, and Mike White getting improbable wins, Geno Smith had perhaps his best NFL game in the Seahawks’ 31-7 win against the Jaguars (+3.5).

Best wishes for Week 9 because you’ve got a lot to deal with this week.  How much do you put into what you saw last? Can you bet against the bad teams again next week? Do you leave the Jets out of the Dirty 7 teams you regularly bet against? Will your favorite-favorite teams be back in action for a cover? Who gets the big upset this week? Is what happened from Week 5-7 the new normal? Can you go back to that strategy?