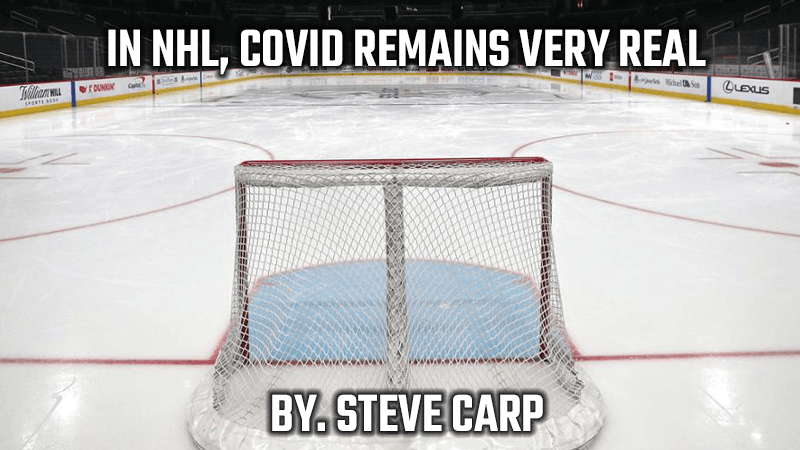 If you thought COVID-19 was a thing of the past, guess again.

In the NHL, it remains very real. It seems like every day, a player or coach is entering the league’s protocol. Sometimes, that player can find himself out of the lineup for close to two weeks, as was the case with the Vegas Golden Knights’ Mattias Janmark.

Anyone who bets hockey knows to check the injury report, vague as it is. And shame on the NHL for not being more transparent when it comes to reporting injuries. The whole upper body-lower body nonsense is so 1980s thinking. And with the league embracing sports betting and daily fantasy for the revenue and exposure it brings to the game, knowing who’s out and why is important.

In Vegas, we still don’t know what Mark Stone’s injury is or how he got hurt back on Oct. 14. That’s because the team nor the league has any inclination to inform the public. All we know is Stone is on injured reserve and that he was seen skating on his own last week, which is good news for the Golden Knights.

So while you may be accustomed to checking the injury report, you need to start watching to see who lands in the NHL’s COVID-19 protocol. In San Jose, five players and coach Bob Boughner were sidelined just hours before the Sharks were scheduled to play the Winnipeg Jets Saturday.

So how do you track this?

One way is to look at the team’s sites. They all have their own reporters who usually put the news out once the team has cleared them to do so. Remember, sometimes, going into protocol is the result of a false positive test and a subsequent test or two can clear a player in time to dress and participate.

Another is to follow the beat writers for the teams on social media. Twitter is a good place to look for such information as the media can find out from the league or the team or see that someone was missing at practice or at a morning skate and ask the coach about it.

Players themselves may have social media platforms and sometimes they scoop everyone with news. So looking up someone on Instagram or Twitter or Facebook could reveal a nugget of information.

“Wait a minute,” you ask, “I thought everyone in the NHL was fully vaccinated. Why are guys testing positive?”

Just because you’re vaxxed doesn’t mean you’re bulletproof. You can still catch COVID-19 and wind up testing positive as a result. What it means is your symptoms might not be as severe as someone who’s unvaccinated.

Only a couple of players are still unvaccinated. Detroit’s Tyler Bertuzzi is one of them. New Jersey’s Mackenzie Blackwood got vaccinated the other day. But again, just because you’ve been jabbed doesn’t mean you can’t wind up in the NHL’s COVID-19 protocol.

So pay close attention to the news before you bet on the NHL. It will remain part of the process for the foreseeable future and it could mean the difference between a winning or losing wager.