Are we not remembering the Titans? We should 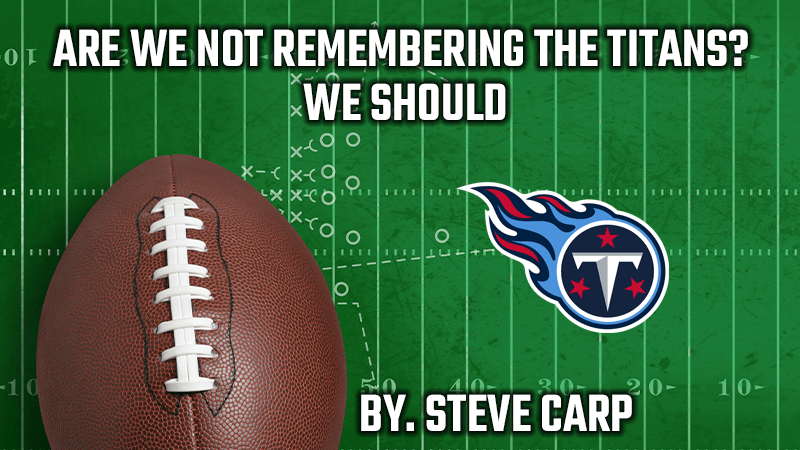 I was looking at the NFL standings Friday as I was flying back to Las Vegas and the usual suspects were at the top of their divisions. The Buccaneers and Tom Brady were leading the NFC South. The Packers and Aaron Rodgers were atop the NFC North. The Buffalo Bills are at the head of the AFC East.

Yes, there are some surprises. Who had the Raiders in front of the AFC West? Did you expect the Bengals to be tied for first in the AFC North?

And as I looked at the standings, one team caught my eye. The Tennessee Titans are leading the AFC South at 5-2. Granted, it’s not a strong division and it appeared from the outset it would be a two-team race to the top, the Titans and Indianapolis. Sure enough, the Titans and Colts are 1-2 as we head to the midway point of the season.

Guess what? They play each other Sunday at Lucas Oil Stadium. It’s obviously a huge game but it seems to be flying under the radar. But it’s a game worth keeping an eye on and perhaps making a wager on.

The Colts are laying 2 1/2 points playing at home. Both teams are 5-2 against the spread with Indy two games behind in the regular standings at 3-4. So this is a huge game for Frank Reich’s Colts.

I’m not sure they’re up to the task, even playing at home. They’re going to have to deal with Derrick Henry, the NFL’s best running back, who can chew up yardage the way a dog chews up toys laying around the living room floor.

Henry has 869 yards in seven games, an average of 124 yards a game. Ironically, the Colts’ Jonathan Taylor is second to Henry in rushing but he’s nearly 300 yards behind. So are the Colts going to be forced to play slow down to match Tennessee’s somewhat deliberate pace of play?

Our Kenny White always points out the importance of pace and both teams are in the NFL’s bottom third. Mike Vrabel can afford to be patient because he has Henry in the backfield and quarterback Ryan Tannehill doesn’t have to take as many risks.

The Tennessee defense is also proving to be pretty good. The Titans have a bend-don’t-break mentality. They allow just under 377 yards per game but teams are only averaging just above 23 points against the Titans. That’s usually good enough to stay in the game and give yourself a chance to win.

If you’re thinking about backing Indy and laying the short price, ask yourself, “Is Carson Wentz good enough to mount enough drives of his own and keep Henry and the Tennessee offense on the sidelines?”

Wentz has only been intercepted once and he completes 64.4% of his passes. But he’s been sacked 15 times and his QB Rating of 58.8 (No. 13 in the NFL) doesn’t inspire a ton of confidence. Tannehill at 61.3, is eighth-best in the league.

It explains a lot as to why the number is at 2 1/2. Perhaps the Colts’ defense can pressure Tannehill into enough mistakes to where Wentz gets a bit of a cushion in the event he struggles. But it’s really a fascinating game, one that bears watching, even if it may fly under everyone’s radar.